IVF is a technique involving the fertilisation of eggs by sperm outside the body. The term literally means 'fertilization in glass' - hence the commonly-used description 'test-tube baby' technique.

When Do We Offer IVF Treatment ? 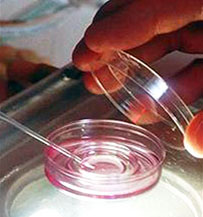 IVF was originally developed as a treatment for women who have blocked or badly damaged Fallopian tubes which prevent the egg and sperm from meeting. However, it may also be used in cases where the husband has poor quality sperm or where the cause of infertility is unknown.The objective of IVF treatment is to overcome these problems to give such couples a chance achieve a pregnancy following transfer of eggs fertilised outside the body into the uterus (womb). 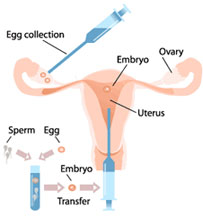 How Do We Go About This?

The IVF treatment process or cycle is made up of a number of procedures as seen in the diagram on the left and described below:

Down regulation ( Suppression of the Pituitary Gland )

Firstly, the woman is prescribed a drug taken in the form of a nasal spray or an injection which suppresses the release from the pituitary (Master) gland of the hormones responsible for the production of an egg. Suppression of the pituitary gland is is necessary in order to to prevent spontaneous release of the egg from the ovary (ovulation) before egg collection can take place.

Once suppression has been confirmed (usually by ultrasound scan) the woman commences ovarian stimulation which takes the form of a daily intra-muscular injection. Stimulating the ovaries in this way should produce several eggs to ensure that there are enough suitable eggs for fertilization.

Regular monitoring of the effects of the drugs on the ovaries is undertaken through ultrasound scans and sometimes blood tests.

When the ultrasound scan and perhaps blood tests indicate that there is a sufficient number of mature follicles (the sacs in which the eggs grow), a final injection is administered to ensure the ripening of the eggs in preparation for the egg collection.

Eggs are collected from the ovaries through the vagina using a fine needle under ultrasound guidance to aspirate the eggs from the follicles. This is performed as a day-case under sedation or general anaesthetics.

On the day of egg collection, the husband is required to produce a semen sample at the centre. The sample is then prepared in the laboratory to extract the most motile sperm.

When all the eggs have been collected, they are put in a dish with the prepared sperm and incubated in the laboratory. Approximately eighteen hours later, the embryologist will check to see whether fertilization has occurred.

If fertilisation has occurred, usually some of the embryos are transferred directly into the uterus two to five days after the egg collection. The embryos are transferred through the vagina and cervix using a fine catheter. This procedure is usually pain free. Any suitable surplus embryos may be frozen and kept in storage for possible future use. This enables women to have a further treatment without the need for ovarian stimulation or egg collection.

Women are advised to use these hormone medications after eggs have been collected to help prepare the womb lining for the implantation of the embryo. We recommend you use them for two weeks at least because the pituitary gland suppression drugs mentioned above may cause natural progesterone hormone level to drop.