In Vitro Maturation of Eggs

In mid 1990s a group at Monash University in Melbourne, Australia, reported the world's first baby born from an embryo derived from an immature egg that had been matured in the embryology laboratory, and then fertilized and transferred to the uterus. The process has come to be known as In vitro maturation (IVM) of eggs. By so doing, these researchers in fact opened the door to retrieving numerous healthy eggs from women whose ovaries had not been stimulated with fertility drugs at all prior to egg collection., and so potentially transforming the entire IVF arena. More recently, Sean Ling Tan, MD from Mc Gill University in Montreal, Canada reported impressive results using IVM, claiming success rates comparable to those being reported for conventional IVF. 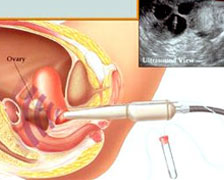 What does IVM treatment involve?

What does IVM treatment involve ? Immature eggs are collected from unstimulated or minimally stimulated ovaries under ultrasound scan guidance. The immature eggs are then matured in the laboratory for 24-48 hours using culture medium with added small quantities of hormones. Intra Cytoplasmic Sperm Injection (ICSI) is used for fertilization of the matured eggs. The resulting fertilized eggs (embryos) are then replaced into the women's Uterus.

How does IVM differ from IVF?

Stimulated IVF involves stimulating the ovaries with fertility medications (gonadotrophin injections) which are associated with the potential risk of developing Ovarian Hyper Stimulation Syndrome (OHSS) which is a serious condition and IVM eliminates this risk because it usually involves minimal ovarian stimulation or no stimulation at all. Also, IVM is less expensive than IVF because it does not involve taking costly gonadotropin injections and involve less monitoring. Moreover, IVM is a shorter treatment regimen compared with IVF. So in terms of safety, cost and acceptability IVM is undoubtedly superior to conventional IVF.

Who would benefit from IVM treatment?

A number of women may benefit from IVM treatment:

Worldwide over 400 babies have now been born through IVM treatment. So far IVM seems to be safe. However, long-term safety records are lacking. Over a million children have already been born after IVF treatment and over 100,000 children have been born after ICSI and long-term data on safety and efficacy are available. Danish scientists have achieved 30 per cent success rates using IVM. Clinical pregnancy rates of 38% for women aged under 36 years having IVM have been reported which compares favourably with that of conventional IVF/ICSI. Professor Bob Edwards, who helped create the world’s first IVF baby , Louise Brown in Manchester UK, believes that IVM could be safely used to treat most women with fertility problems and will revolutionise fertility treatments. “I see IVM as an all-round –and cheaper- solution” he says. “This really is a new era for IVF. A revolution. I think IVM will replace IVF. It all looks very promising.”