Azoospermia (total absence of sperm in the ejaculate) can be due either to a blockage, absence of the vas deferens or to a failure of the testes to produce sperma. The degree of this failure can be variable.

It is however possible to recover sperm directly from either the testis itself or from the epididymis, which is like a small reservoir attached to the testis. This is called surgical sperm collection. Sperm that is collected in this way is not able to fertilise the egg in the natural way and ICSI is always necessary. This leads to a fertilisation rate of around 65%.

In cases of testicular failure, it is now possible in around 50% of cases to collect at least a few sperm by performing one or multiple testicular biopsies. Provided some motile sperm are recovered, the chance of fertilization of the egg is again extremely good.

Surgically collected sperm can be frozen and kept in storage so that it can be used during subsequent ICSI treatment. 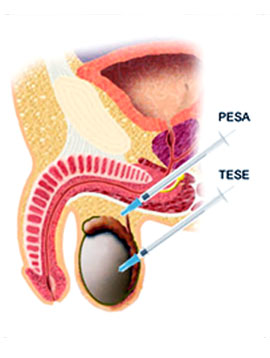 This procedure is usually performed under local anaesthetics. Patients will be able to go home 1 to 2 hours later.