Around one in five women of reproductive age have a small cyst on their ovaries. These will cause few problems to the majority of women, but in some cases will be accompanied by further troublesome symptoms and even infertility. The condition is then known as polycystic ovary syndrome and may require specialist treatment.

This term describes the appearance of the ovaries when they are seen on an ultrasound scan. The polycystic ovary syndrome (PCOS) is the name given to a condition in which women with polycystic ovaries have one or more additional symptoms.

The diagnosis of PCO is usually made by ultrasound scanning. 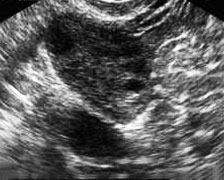 Women have two ovaries; they are located in the pelvis alongside the uterus (womb). Their main functions are to release eggs and produce hormones. At birth, the ovaries are provided with thousands of eggs, each surrounded by cells which will develop into small, fluid-filled sac known as a follicle. Each month, in women with regular periods who are ovulating normally, one of these follicles will grow to about 18mm in diameter and then release an egg (ovulation), which passes into the Fallopian tube. Here, fertilization takes place, and then the fertilized egg (embryo) moves down the tube, to the uterus to implant in the lining (endometrium) and develop as a pregnancy. If no egg fertilizes, the endometrium is shed as a menstrual period around 14 days after ovulation.

The important groups of hormones – estrogens, androgens, and progesterone – are also produced in the ovary. These in turn are regulated by the release of two further hormones from the pituitary gland at the base of the brain – follicle stimulating hormone (FSH) and luteinizing hormone (LH). These two reproductive hormones influence the development of the follicle and the timing of ovulation. 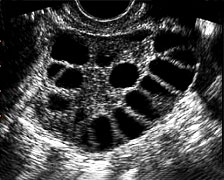 Polycystic ovaries contain many small cysts – at least ten. Some of these cysts contain eggs, some are dormant, and others might secrete hormones. The cysts are quite small, usually no bigger then 8mm, but they are clear enough on ultrasound to allow accurate diagnosis. Blood tests might also reveal changes in hormone levels which are characteristics of polycystic ovaries, but these levels vary considerably from one woman to another.

Doctors are still not entirely clear why some women have polycystic ovaries. There maybe a hereditary link and they are present in women of all ages, many of whom show no symptoms of PCOS. In other words, ovaries do not suddenly become polycystic, but women who have always had polycystic ovaries may develop symptoms at any time. The cause of polycystic ovaries is believed to involve an inability of the ovaries to produce hormones in the correct proportions. The pituitary gland senses that the ovary is not working properly and in turn releases abnormal amounts of LH and FSH – which may mean that unusually high levels of LH are circulating in the bloodstream.

THE SYMPTOMS OF PCOS

A Danger to Health?

The small cysts detected in polycystic ovaries do not get any bigger; in fact they usually disappear only to be replaced by other similar cysts. They remain small (no bigger than 8mm) and do not require removal by surgery. Sometimes larger cysts (over 20mm) might release an egg. Only very large cysts (over 50mm) require surgery, and they can occur in any women, whether she has polycystic ovaries or not. There is no link between the cysts of polycystic ovaries and ovarian cancer. However, although the risk is still very rare, women with few or absent periods are at an increased risk of endometrial cancer. This can happen when the womb lining (endometrium) becomes too thick, regular shedding in the form of a period prevents this. If the endometrium appears thick or irregular on an ultrasound scan, a D&C (dilatation and curettage) operation might be advised.

Obese women with polycystic ovaries are also at a regular risk of heart disease – simply because excess weight is linked to a high blood pressure and excessive levels of cholesterol in the bloodstream, both known risk factors of heart disease. A high fiber, low fat and low sugar diet at a young age may help reduce those risks in later life- as will stopping smoking. Diabetes in later life, in which the body becomes unable to use sugar efficiently, is also associated with excess weight. Medication might be needed, but weight loss and a lower intake of carbohydrates will also help Indeed, being overweight is probably the cause of the greatest and most frequent problems for women with PCOS.